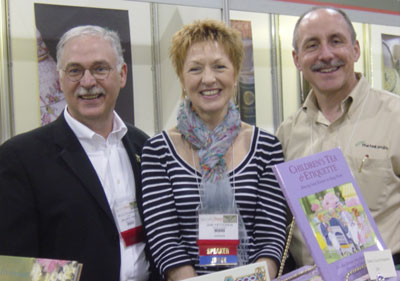 This is the event for those involved, and those that want to be involved, in the specialty tea industry in North America. The international flavor comes from those growers, blenders, wholesalers, and accessory manufacturers that truly come from all over the world to market here.

There are three main aspects to the show; education, exposition, and networking. Each day there are a number of concurrent sessions that cover everything from trends in tea, to health, to special tastings. The exhibits are quite interesting. They include regional tea boards from major producing countries, accessory manufacturers, books, and just about anything tea related. You can even buy tea plants to bring home!

The networking is particularly enjoyable, as we have made some wonderful friendships over the years.

Tim, our Chief Leaf, led off Friday morning with a session called 'Doubling Up; Growing from One Store to Two, and Beyond." This was well received and generated several questions from attendees during and after. During the remainder of the show Tim's badge identified him as a speaker, so he was stopped regularly with questions.

Paulette, our Loose Leaf, focused on those sessions that dealt with the health benefits of tea and rooibos. Each year literally thousands of papers are written on this topic. They continually reinforce what tea drinkers have know for thousands of years, as well as bring some new research to our attention. We will highlight some of the information we gathered in future Leaflets.

Andy, our Legacy Store Manager took everything in at this, his first Expo. Among his favorite sessions were the Focused Tastings from Japan and Oolongs. He also found a few new items to sell in the stores.