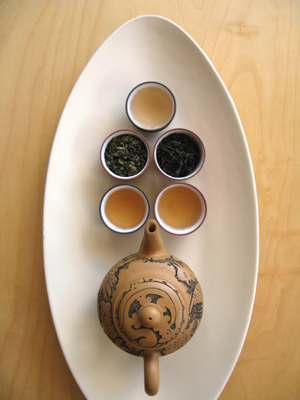 Caffeine often becomes a college student's best friend at some point during their academic career. Whether it's in the form of an all-nighter aid or a morning coffee-shop routine, caffeine seems to find its way into the bloodstream of students across the spectrum.

Because of the caffeine craze, more people are looking for alternatives to coffee as their beverage of choice. This could explain why a handful of tea shops have popped up in Omaha over the past few years.

Nikki Smith is the manager of the Tea Smith on 78th and Dodge streets. She said college students are not only migrating to the Tea Smith for the free wireless Internet that they can enjoy with their favorite blend of tea, but also "the atmosphere is conducive to studying."

Because tea does not leave you feeling jittery, it is the perfect study aid to help you keep alert, but focused.

"Generally, the tea is ingested more to the digestive system," Smith said.

Contrastingly, coffee goes straight to the nervous system. This explains why coffee can cause you to have the jitters, while tea has a more sustained level of caffeine absorption.

Smith explained another benefit of loose-leaf tea is you can get more than one infusion out of the same leaf because the leaf has a larger surface area. Drink prices start at an average of $3 to $5 for 25 cups of tea at the Tea Smith, which is the price many coffee houses charge for one cup o' joe.

Tea has other benefits that affect more than just your wallet. Some studies have shown that tea may have health benefits, ranging from boosting your metabolism to cancer prevention.

A recent study on Japanese men suggests that getting into shape might be as easy as one, two, tea. According to WebMD.com, the catechins found in green tea may reduce body fat when incorporated into a consistent diet.

There are about two calories in one cup of tea, according to calorie-count.com. However, if you order a tall Cafe Mocha with whipped cream from Starbucks, you are consuming more than 500 calories. That's an entire meal in one Styrofoam cup.

So the next time you feel a cold coming on, instead of reaching for the Tylenol, the cure could be as close as your nearest tea shop in the form of ginger-infused tea. This root is said to relieve nausea, cold symptoms and sore throats, and comes highly recommended by Smith.

Marcia Adler, coordinator of Student Health Services at UNO, said tea is a good way to get warm hydration. Because the prospect of drinking plain hot water might seem unappetizing to some, infusing it with a blend of your favorite tea to warm up after freezing cold walks around campus can be helpful.

Adler also said tea may be a helpful aid to asthma sufferers. When asthmatic symptoms arise, Adler has observed that tea took away the trigger for one of her patients.

In addition, Adler compared tea to "mom's medicine cabinet" because it can be a home remedy for many cold and flu symptoms, such as sore throats or nausea, due to its properties as an anitemetic.

Though the health benefits of tea remain disputed, enough people find the idea intriguing that tea shops all over Omaha are having no trouble pulling in customers. If not for the health benefits, more people are leaving coffee behind and exploring the variety that tea has to offer.

Because so many varieties of tea exist, the Tea Smith has narrowed their selection to around 95 different loose-leaf teas. This allows many more options than your standard coffee house, so people can experience several varieties of tea.

"It's a booming industry for health benefits and alternatives to soda," Smith said.

She added that tea is the second most-commonly drank substance in the world, and is currently No. 6 in the United States.

With the increased interest in tea, perhaps it will soon climb the charts as America's most drink of choice. However, until the health benefits of tea can be scientifically substantiated, it will be up to the general public to judge whether they can physically or mentally benefit from drinking tea one cup at a time.